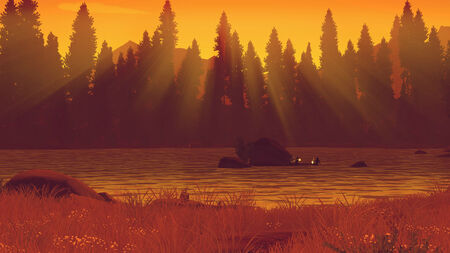 Chelsea Stevens and Lily McClain are characters in Firewatch.

Chelsea and Lily are two teenagers who are encountered on Day 1. They were camping in the meadow and skinny dipping in the lake. They are both very irresponsible and inconsiderate, as they litter their beer cans everywhere and blatantly ignore fire danger warnings, setting up a campfire and setting off fireworks during the dry season. They are not directly seen, but their silhouettes can be made out on an island in the lake.

Chelsea and Lily are the focus of an initial investigation. During the investigation, it was discovered that they were drinking Whiskey and Beer in addition to illegally setting off Fireworks. After stripping off their Underwear and Bra and leaving their Boom Box on full, they went to the rock outcropping in the middle of the lake; when discovered by Henry, they called him a creep.

A few days later, Henry learns through his supervisor that the two girls went missing, and their parents haven't heard from them in over a week. Henry, according to Delilah, is most likely the last person to have seen them.

Delilah later tells Henry that they were in jail, after stealing a farmers tractor to joy-ride, and were not missing.