Brian Goodwin was a 12 year old boy who was the son of the previous lookout Ned Goodwin. He died in a rock climbing accident in cave three years before Henry arrived. His hobbies included fantasy novels, comic books, and role-playing games. Brian was a bright child according to his theory on how to use meteors to channel radio waves.

He was found wearing a pink shirt and had lost one of his shoes, and from the game it looks as if the death was not an accident due to his skull being perfectly crushed by a small boulder. Ned, his father, thought to be the killer, later discusses with Henry through tapes that it was an accident.

The cause of Brian's death was because Brian did not sink his anchor right.

Photograph of Brian Goodwin from the in-game, single-use camera. 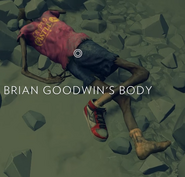 Brian Goodwin's Body.
Add a photo to this gallery

Retrieved from "https://firewatch.fandom.com/wiki/Brian_Goodwin?oldid=5508"
Community content is available under CC-BY-SA unless otherwise noted.